The Lord is My Husband 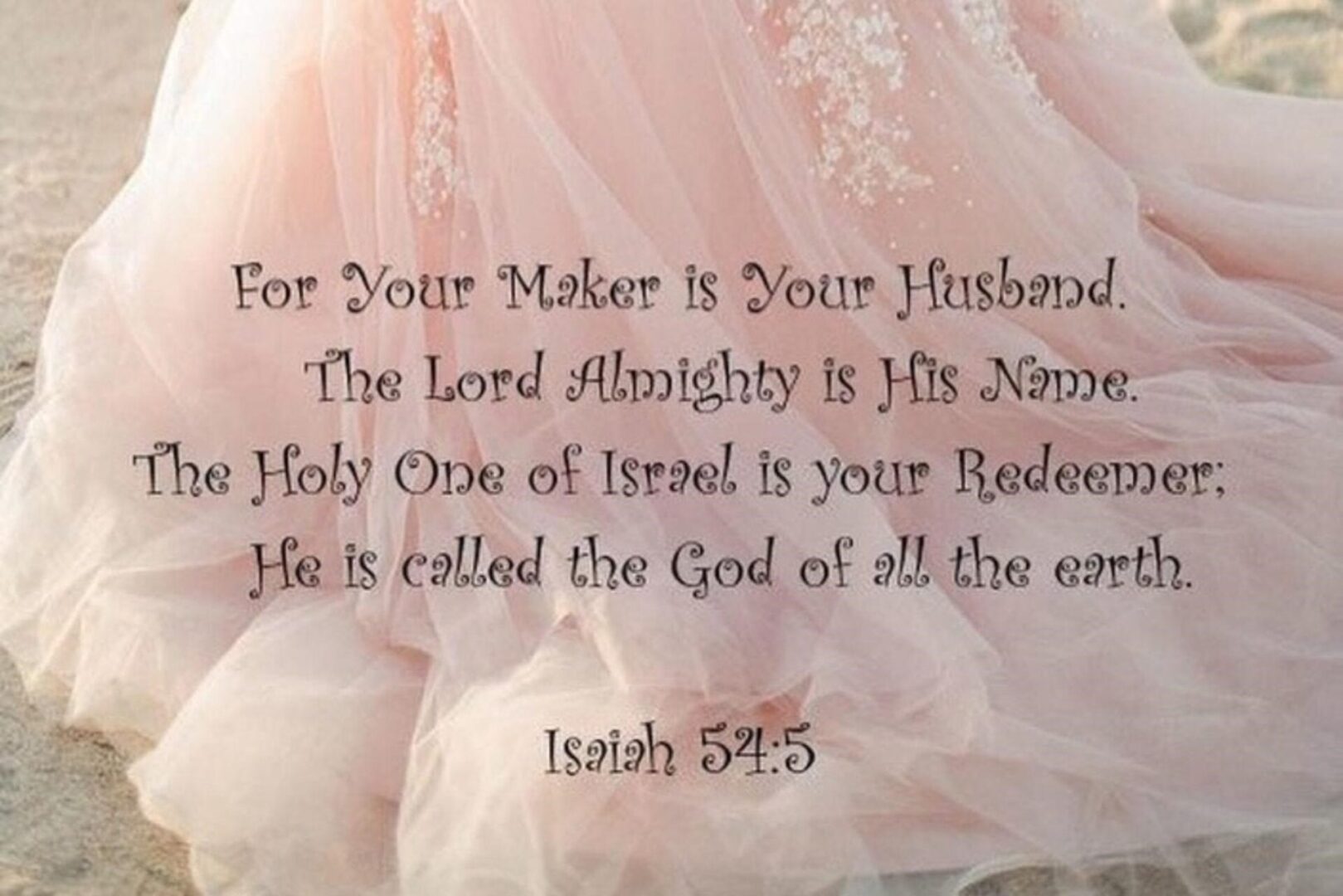 You may have seen this, or heard that the Bible says, “The Lord is my Husband” in Isaiah 54:5. Maybe you wonder like I did what in the world this means and how this works when I am here on earth and He, God, is in Heaven? Good question, congratulations! After hearing this from the Lord I too wondered, what is He saying?

After years of feeling like I was not the marrying kind, maybe from the molestation as a child or the rejection of most of the guys I ever liked by my parents (dad), I finally got married at the spry young age of 29 to a man of course of which my parents were not excited. No surprise there. So of course, by now I learned to just move on. Although, to my disappointment three years and one son later, he would leave, and this, for the third time. Great, my parents were right. He ultimately chose to be free from family responsibility. Abandoned, all I had was my son, thank God, and one hundred dollars. Homeless but not helpless.

God would show up, first He gave me peace. Peace I cannot explain other than to say I felt like an eagle lifted up over the turmoil below. But for God’s grace I could have easily questioned God, but the Lord told me he would leave us a couple days before, and this time I was to let him go. If God said to let him go, then He, God, must have a way for me, I just had to follow Him. That thought brought me such peace and comfort to move ahead expecting God to show up.

And show up He did! After placing the hundred dollars in the church offering as they said if what you have doesn’t meet your need then it is your seed, God began to open doors and provide. First with a place to stay, then a good church, a friends’ recommendation, a job, a car, childcare, new clothes, and eventually my own place with the help of unexpected movers (angels) and furnishings. Wow, in less than two months, what amazing grace God showered on us.

The Lord was better to me than my husband. I felt like I was riding the thermals high above just living in the favor of God the whole time with such wonderful peace. The problem was I was still praying for God to bring him back, that’s all I wanted for Christmas. Oh, he came back against the advice of some wise counsel, and yes, you guessed it, only to leave again three months later. Only this time, he used me, and my son, my finances and some of our recently acquired household items. Now, I lost my peace, I was so upset. I never felt this bad before. So now God required me to pray every day like Jesus for him, “Father, forgive him, have mercy on him for he knows not what he’s doing, and bless him Lord.” I had to pray like Job did, for his friends.

Finally, after three months, I was free from pain and hurt. Next came a season of healing through the singles group at church, and then dating. The Lord however brought that to an end when he said no more. This is when He took over and took me to Isaiah 34:16, “I, the spirit of the Lord, will gather your mate for you and you shall not lack your mate.” Well, this was new, and would begin a season of knowing the Lord as my husband. This became such a sweet time of allowing the Lord to be present filling me with hope, comfort, and provision. A chapter in my life I would look back to often of knowing the intimacy of His unfailing love.

And then finally, after a year and half, the day came, the long-awaited man the Lord had was introduced to me, the man who would become my husband. After a year of dating, we married, honeymooned, and three months later settled into our new home. Then started what I didn’t see coming, a season of disillusionment and confusion wondering where did my Lord go? How could I feel so alone and abandoned by God in the supposed blissful marital relationship that He ordained? Depression and exasperation set in as I tried to navigate on my own the marriage for which I had believed and waited.

Until one day my former prayer partner called and said “Janet, you’ve been on my heart for a week, the Lord wants to tell you, He’s STILL the Lord your husband!” Wow, that just made me cry more! I just did not understand. Until one day, my mentor Vicki during an “ordained” surprise visit (led by the Spirit) came and asked me how I was, and then what was God saying to me? Through my sobbing and weeping I uttered out, “All He keeps saying to me is He is STILL the Lord my Husband!” To which she smiled and laughed, and said, “Janet, that’s your answer!” I thought for a minute, my answer?

Then suddenly it hit me like a flash of lightening, I saw it. This Word was my seed to sow. If I will receive this seed now, believe it and lift it back up to God in praise He can come once again into the situation and manifest Himself as the Lord my Husband. I immediately got on my knees and repented for my lack of faith and began to declare this Word from that day forward that He is still the Lord my Husband. What happened next, over the following year was nothing short of miracles after miracles. God took us on an amazing journey of seeing His manifest presence heal and unite our hearts as the “two became one.”

My book, The Lord Is My Husband, offers you the healing story of that journey and how you can receive encouragement to know Him as your Husband. Whether you, like I, find yourself in one or, having lived in all of these seasons – single, dating, engaged, married, separated, divorced, a single parent, married again (blended family), or now a widow, I offer you eight memorial stones of hope and healing to set up. Along the way, they will mark your journey from loneliness to fullness, from pain to peace, and from confusion to power. As you receive this Word, I believe you will set up your stones as guideposts for others to follow you.

Now that my husband has gone on to be with the Lord, this word means more to me than ever. Although I know firsthand how difficult it can be to keep faith when life doesn’t turn out like the fairy tale, I continue to be overwhelmed by the goodness of God. I hope this book will bring you the encouragement it brought me as I am forever grateful for the experience of knowing the Lord as my husband. I pray that you too experience the flood of His love as your husband. May this ‘handbook’ or journal of my journey help you navigate your journey into this place of peace, protection, and provision with the Lord as your Husband.

God bless you to be the bold, beautiful bride you are!